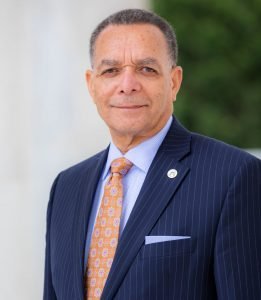 Dr. Weymouth Spence is the nineteenth president of Washington Adventist University, located near the nation’s capital in Takoma Park, Maryland.  Washington Adventist University (WAU) is one of the fourteen higher education institutions in North America with an affiliation to the Seventh-day Adventist Church.  He began his presidency at WAU in January 2008 and during his tenure has put together a leadership team that elevated and transformed the former Columbia Union College (CUC) to university status and is continuing to build on the legacy of former presidents to elevate the University standing to one of international distinction.

Among his accomplishments as president has been to refocus the University’s strategic plan to fulfill the University’s mission and vision and to rollout the six pillars of institutional excellence – quality, people, finance, growth, service, and community. Recent accomplishments include the largest enrollment ever in 2012, the largest graduating class ever; reaffirmed ten-year accreditation from Middle States Commission for Higher Education, completion of a campus master plan that realized the first new building on the campus in forty years – The Leroy and Lois Peters Music Center. He created a vice president for ministry position that now focuses on the spiritual development of the entire university community and a significantly improved fiscal standing. A recent addition to the WAU Campus is the new Boyer Health and Wellness Building that has added a modern design and feel for our nursing students.

In the course of his commitment to building a culture of institutional excellence that is focused on student outcomes, he launched the Vision 2020 goals for building a thriving university that will hold true to the mission/vision of WAU. During his first decade, many of the goals set during vision 2020 have been fully realized. He now looks to Vision 2030 as the university pivots in an ever-changing and challenging landscape for institutes of higher education. Within this vision, the university will continue to serve and educate students, ultimately helping them achieve their desired goals and highest potential for service; in other words, succeed. Student success will be the backbone of Vision 2030 and will empower the university’s leadership to make moves that will allow WAU to grow and thrive in the future.

Prior to his appointment as WAU President, Dr. Spence served in leadership positions for over 30 years in higher education and health care institutions as program director, dean and vice president for academic administration.  He holds an Arts and Science degree from Northern Caribbean University, a B.Sc. in biology from Atlantic Union College, an Associate in Science degree in Radiography from Kettering College of Medical Arts, a Master of Science degree in Curriculum, Research and Administration from Central Connecticut State University and a Doctorate in Vocational/Technical/ Occupational Education from Nova Southeastern University.

Dr. Spence has served on many institutional boards including the Adventist Health Care and Washington Adventist Hospital boards. He currently serves on the boards of Montgomery County Chamber of Commerce, MICUA (Maryland Independent Colleges and Universities Association) and Campus Compact Mid-Atlantic. In 2006 he was recognized for providing the leadership for developing and implementing the first inter-state accredited RN program between San Antonia, Texas and Phoenix, Arizona. He was recently recognized by the Columbia Union Conference of Seventh-day Adventist as a Notable Person of Honor for his leadership accomplishments.  Dr. Spence’s hero is Jesus Christ and he believes that modeling the life and teachings of Jesus is the answer to every problem.

He is married to the former Rebecca Brown and they have two children, Melissa and Weymouth II, and three grandchildren, Aidan, Olivia, and Valerie.