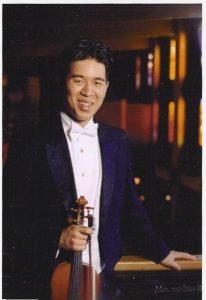 Dr. Brian Liu holds a Doctorate of Musical Arts in Violin Performance from the Catholic University of America and a Master of Music in Performance and Literature from the Eastman School of Music.  His principle professors include Mikhail Kopelman, Charles Castleman, Jody Gatwood, Christian Teal, and Mark Reneau.  He has performed with numerous orchestras, chamber groups, and has appeared as soloist with the East Tennessee Symphony Orchestra, SAU Symphony Orchestra, and the New England Youth Ensemble.

When not teaching or performing, you can find him out running, cooking in the kitchen, planning his next dream trip, or hanging out with his wonderful wife, Esther, and two children, Caitlin and Joshua.