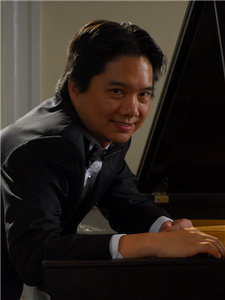 Pianist Daniel Lau has received enthusiastic press notices for both his solo and chamber performances. The Washington Post praised his “exemplary artistry;” the Baltimore Sun noted “Lau’s beautifully shaded playing;” the Intelligencer Journal (Lancaster, PA) lauded his “flair, great technical proficiency and expressiveness;” and La Liberté (Fribourg, Switzerland) cited “playful nuances, translucent phrasing, and miraculous sonorities.” He has appeared in recitals and with orchestras throughout North America and Europe. He collaborates frequently with singers internationally and is a sought-after chamber musician. With soprano Sabrina Coleman Clark, he has performed a multimedia show, “Marian Anderson – A Legacy of Hope,” to thousands of school children.  He is a founding member of the Ravel Trio praised recently by the Swiss Journal du Jura, “Splendid interpretation, vigorous and nuanced playing.” Since 2006, Dr. Lau has released half a dozen recordings with a variety of artists, including a CD with award winning engineer Marc Arbort and a self-produced solo CD “Transcendent Colors.” With a special interest in Asian American and African American composers, Lau is committed to the performance of living composers. He has premiered many solo and chamber music works and can be heard on a number of recordings of works by contemporary living composers.

A versatile pianist, violinist and conductor, Lau has served as Music Director for performances of Manon, Amahl and the Night Visitors, The Merry Widow, and The Magic Flute, among others. Lau attended Loma Linda University, where he served as concertmaster of the orchestra and 1st violinist of the LLU String Quartet. Graduating with a Bachelor of Music Degree in Piano Performance – high honors, he won the coveted Dean’s Award. He then attended the Peabody Conservatory of Music, becoming a member of the Pi Kappa Lambda honorary society while earning masters and doctoral degrees. His major teachers include Lillian Freundlich, Anita Norskov Olsen, Samuel Sanders, and Jerome Lowenthal.

Dr. Lau is a dedicated educator of music and has given masterclasses and clinics throughout the United States. He serves as Chair of the Maryland State Music Teachers Association Chamber Music Festival and Competition Coordinator for the American Liszt Society Liszt-Garrison International Piano Festival and Competition. He has taught at the Pennsylvania Academy of Music, the College of Notre Dame of Maryland and is currently Assistant Professor of Music at Washington Adventist University and on the faculty of the New England Music Camp.