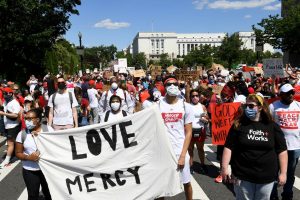 Tens of thousands of people have marched through the streets of cities across the world, protesting against racism, injustice, and the wrongful deaths of George Floyd, Ahmaud Arbery, Breonna Taylor, and many more black lives that are gone at the hands of police brutality. Right alongside the world, WAU’s students have found their voices. Masses of protesters have filled the streets of DC for weeks, and among them have been many of WAU’s leaders, students, and activists. 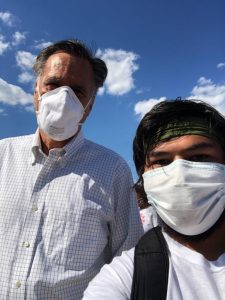 Jorge Mendoza, a theology student and a well-known voice for change on many issues on WAU’s campus, was noted in a Washington Post article entitled, “Faith Community Takes Center Stage as Thousands Again Gather for 10th Day of Protests in DC”. The article reads, “Jorge Mendoza, a 26-year-old pastor-in-training from Hagerstown, Md., walked in silence, streaming the moment live on Facebook from his phone. He wanted to bear witness, he said, for those unable to march.” Jorge says, “The specific system of oppression I was speaking against is police brutality and even more specifically the case of George Floyd. During my nearly 3 miles of marching, the final words of George Floyd echoed in my head. “I can’t breathe. I can’t breathe. I’m through. I’m through”. I vowed to use the breath that I have to cry out for justice. I didn’t see this as simply a civic duty but also a religious duty.” While marching Jorge had a chance to meet and walk with a former presidential candidate and current senator Mitt Romney.

Dachele Cuke, WAU’s Director for Integrated Marketing and Communication, spent three days protesting in Baltimore and DC, she says, “It’s beautiful to see people from all over the nation coming together for a cause. You hear about world change, but to see it and be in it is a whole other experience. This is history in the making. And I’m proud to see the fight in everyone looking for equality and an end to racism. This is what America should be about.” 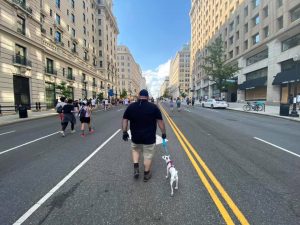 Students, as well as WAU administration, took part in the marches over the weekend. VP for Integrated Marketing and Communication, Richard Castillo took his family to march on Saturday, June 6 in Downtown DC “My daughters have been witness to the news and the horrors that continue to be front and center in our world right now. They wanted to stand with those who are lifting their voices, and I want to make sure they have that opportunity. My wife and I also want to advocate for change as our friends and loved ones should no longer have to live in fear of violence. The shock we continue to feel motivates us to do something, anything to help bring this movement to a critical mass for change.” 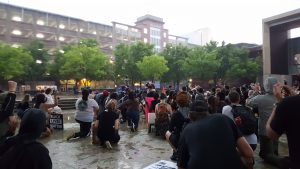 Like many around the country, Kathy Hecht, WAU’s Weis Library Circulation Technician, wanted to do more than post on social media. “I had posted my support of Black Lives Matter on social media, but it wasn’t enough. I HAD to be present to share my support physically. The Silver Spring march I attended took place along Route 29 with police cars protecting the curb lane for the marchers.  Many cars honked their solidarity while driving past in both directions. I was very pleased for all the young people who had organized this event that they were being acknowledged and supported.  The weather was stormy, but even more reason for me to be there for those who couldn’t.  We shared chants, we shared songs, and we shared umbrellas.  Then we all took the knee at Veterans Plaza for eight minutes and forty-six seconds.”

The voice for change becomes louder with each moment, and as WAU’s Faculty, Staff, and Students find ways to embrace their voice, a historical moment unfurls. 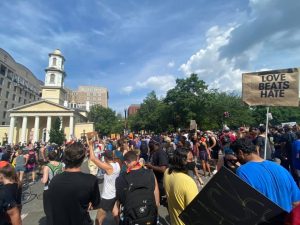