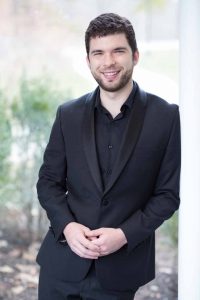 Michael Patterson is a conductor, pianist and composer living in the greater Washington D.C. area. His conducting has been emphatically reviewed by the Millbrook Independent as having “…dramatic subtlety with deep finesse.”  He currently carries the position of Minister of Music at the Spencerville Seventh-day Adventist Church, serving as a director of both the sanctuary choir and orchestra.  Additionally, Michael is Director of Bands at Washington Adventist University, where he also serves as instructor of conducting, piano, and composition. There he also directs the Original Instruments Ensemble, baroque emphasis and new music emphasis.

Michael graduated with a Masters in Orchestral Conducting from Bard Conservatory of Music, where he studied with James Bagwell, Leon Botstein, and the late Harold Farberman.  Additionally, he studied composition with Joan Tower and George Tsontakis, both renowned American composers. At Bard, he carried the position of assistant conductor of the Bard College Community Orchestra. He also led Bard’s Vocal Arts Program (Dawn Upshaw, program director) in a performance of Irish composer Siobàn Cleary’s “Theophilus Thistle and the Myth of Miss Muffett” at the National Sawdust, a contemporary music venue in Brooklyn. Other performances include leading the premiere of rising American composer Daniel Castillanos’s “Odi et Amo” with renowned tenor Rufus Muller, as well as leading the Bard Brass Ensemble (Edward Carroll, program director) in an all Hindemith program.

In 2013, Michael carried the role of Director of Bands at Spencerville Adventist Academy, ultimately launching his professional conducting career. At SAA, Michael directed the Academy Concert Winds, the Academy Jazz Ensemble, and the elementary and middle school bands. He also served as music director for the musical theater program, leading the ensemble and cast in performances of Jerry Bock’s Fiddler on the Roof and Rodgers and Hammerstein’s South Pacific.

As a composer, Michael has over thirty works under his name.