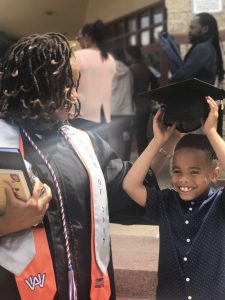 Lotara “Tara” Smith—a Washington Adventist University (WAU) alumna, a former member of the Acro-Airs team, and a dedicated mother—began her educational journey at Montgomery College in Takoma Park, MD. After completing her requirements at the community college, the Holy Spirit prompted her to continue her academic journey at WAU. In the beginning, she was anxious about returning to school full-time as she is also a single mother. Between work and family responsibilities, finding the time to focus on your studies can be extremely difficult for a single mother with a child to raise and provide for. However, God held her up each step of the way, introducing her to fantastic professors and advisors—such as Professor Alvin Fuentes—who served as constant sources of support.

Upon graduating from WAU in 2017 with a Bachelor of Science in Health Fitness Management, Tara immediately returned to the workforce. She served as a contractor for multiple different organizations such as corporate wellness, local and federal government organizations, and senior citizen communities. In each contract, she served as a health and wellness coordinator in various capacities.

Along the quest to grow and advance within the field of health promotion, the Holy Spirit prompted her to return to school again. This time she was even more anxious because attending graduate school would be more intense than college. The statistics for single mothers earning advanced degrees are even lower than that of attaining an undergraduate degree. But she was determined. After multiple failed attempts, she regained momentum and matriculated into Walden University with the end goal of earning her master’s degree. As with WAU, she was not without support. This time, she received the support of Dr. Denise Hinds, who served as her mentor despite no longer being a student at WAU. Through the grace of God, she successfully completed her Master of Science in Health Education and Promotion on February 14, 2021.

Now, Tara continues in her role as a contractor for the Montgomery County Department of Health & Human Services, where she serves as the Health & Wellness Initiative Coordinator for social services recipients. She is also an adjunct professor at the Baltimore City Community College. Next, Tara hopes to secure financing to return to school again. This time she hopes to earn her Ph.D. in Health Education & Promotion—a goal that would not have been considered without the encouragement of Dr. Alban Bacchus, a former professor in the HWPE Department. Her goal is to advance herself and provide better economic opportunities for her family and to serve as an example for other single mothers who have similar dreams—that being a single mother does not have to impede your wish for higher education. She credits her accomplishments to God, her family—especially her son—,and her support network.