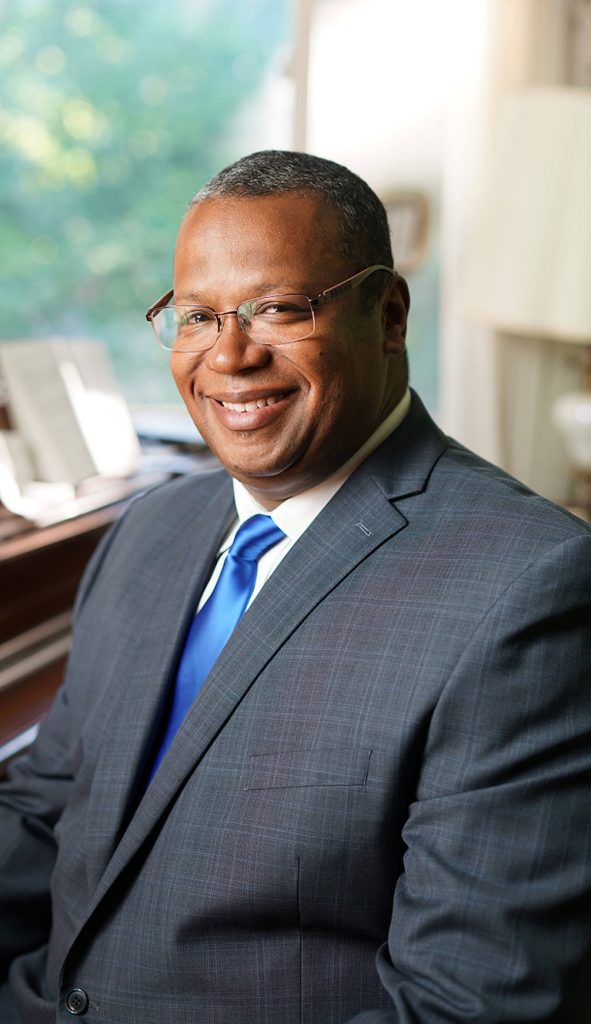 David Griffiths’ voice powerfully proclaims God’s message of grace in word and song. Holding degrees in both music and theology from Columbia Union College and a Masters of Music in Vocal Performance from The Peabody Conservatory of Johns Hopkins University, David uses both his knowledge of God’s word and his passion for musical excellence to inspire others and give God greater glory.

A prolific composer and accomplished pianist, he has gained widespread recognition in addition to singing for his more than 300 compositions, his success as a teacher of both piano and voice, and skill in the recording studio. Recently awarded the honor of the International Singer Songwriter Association’s Christian Songwriter of the year for 2009, he has had several commissions for compositions from a variety of groups and causes. The National Aquarium in Baltimore, Allegheny East Conference of Seventh Day Adventists, Adventist Relief Agency, and the prestigious Midori and Friends 3rd annual Children’s Festival in Manhattan are just a sampling of those who have required his compositional skills to rave reviews. He is excited about the release of his first book of sacred worship music, ”The Praise and Worship Experience Songbook Volume 1.” As a respected musician in the area of sacred music, he recently served as Assistant Music Director of the Dream Choir, which he was instrumental in preparing for a landmark concert performance at Constitution Hall on the occasion of the dedication of the Dr. Martin Luther King, Jr. Memorial.

As a vocal soloist, Griffiths has given a wide array of performances across several genres. He was a featured soloist with the Paul Hill Chorale at the John F. Kennedy Center for the Performing Arts and recorded Kirke Mechem’s Danuel with the group on their CD, Unequaled Praise. He has performed as a soloist in Faure’s “Requiem,” Handel’s “Messiah,” Handel’s “Utrecht Te Deum,” Haydn’s ”The Seasons,” Camille Saint-Saens “Christmas Oratorio,” Ron Warren’s “Day Dawn, Eugene Friezen’s “Earth Requiem” and Glenn Burleigh’s “Born to Die.” Other works performed include Menotti’s  “Amal and the Night Visitors,”  Scott Joplin’s “Treemonisha,” and Donizetti’s “Don Pasquale.” Griffiths has performed on Capitol Hill on several occasions, including the 2010 Africa Dinner of The National Prayer Breakfast. Griffiths has also performed as a soloist in Kenya, Rwanda, Uganda, France, Korea, Japan, the Caribbean, Canada, and across the United States. He has shared in programs that included many noted singers and groups including Be Be Winans, Donnie McClurkin, George Duke, Earnest Pugh, Marcus D. Wiley, William Murphy, Maurette Brown Clark, Duawne Starling, Wintley Phipps, Angela Brown, Janice Chandler, Take 6 and many others. He was a featured soloist in the 2000 General Conference Session of the Seventh-day Adventists in Toronto, Canada, where he sang in the Sky dome for an audience of over 70,000. Griffiths has appeared on the Bobby Jones Gospel Hour, Breath of Life telecast, Three ABN satellite network, Hope Channel, Dare To Dream Network, and on a number local and public interest programs.

As a speaker, David has been a guest preacher for several revivals locally, in Virginia, in Delaware, and as far away as South Korea.  One of his highlights in preaching ministry was when he preached in Korean at the Choon Chun Language Institute Church, in Choon Chun, South Korea.

In addition to teaching at Washington Adventist University, David teaches chorus and music at Hammond Middle School in Laurel, Maryland and voice in his private studio in Beltsville, Maryland.