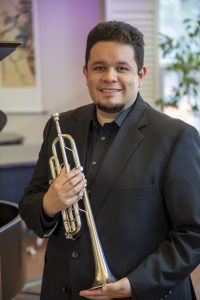 Jose Luis Oviedo began trumpet at the age of 10 with his father in Mexico. He later enrolled as a student in the National Conservatory of Music of Mexico City where he later earned a bachelor’s degree while pursuing his studies in the USA. He has played with some of the most prestigious orchestras in Mexico City such as the Mexican National Philharmonic, Mexican National Symphony, Mineria Symphony Orchestra, and Bellas Artes Chamber Orchestra. In 2002, he was invited to play with the New England Symphonic Ensemble at Carnegie Hall, New York, and was awarded a full scholarship to study at Washington Adventist University where he earned his Bachelor of Music. Since then, he has toured and performed as a soloist with the NEYE throughout the USA and over 25 countries including venues as Windsor Castle, St. Martin-in-the-Fields, Ely Cathedral, Salzburg Cathedral, Crystal Cathedral, Kennedy Center and Strathmore Hall. During his studies at the University of Maryland, where he earned a Master of Music degree, he studied with Chris Gekker and Steve Hendrickson.

He is currently a member of the New England Symphonic Ensemble, with whom he has performed several concerts at Avery Fisher Hall and Alice Tully Hall in the Lincoln Center and over 50 concerts at Carnegie Hall. He served as director of the Washington Concert Winds at Washington Adventist University from 2013-2020 and currently teaches the WAU Brass Ensemble, Music Appreciation, and Elements of Music. He is an active freelance artist in the Washington DC metropolitan area.