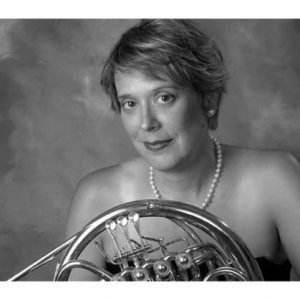 In December, 2016, Dr. Amy Horn retired after almost thirty years in “The President’s Own” U.S. Marine Band capping her career there by performing as a horn soloist on the Band’s October, 2016 tour of the southeast United States. A versatile musician and entertainer, Amy also sang and played guitar in the Marine Band’s country rock group, Free Country.

She has performed with most of the Washington, DC metropolitan area musical organizations including the Baltimore and National Symphonies, Washington Concert Opera, Washington Symphonic Brass, Alexandria Symphony (principal), the American Pops Orchestra (principal), and the Concert Artists of Baltimore.

Amy has enjoyed teaching during her time with the Marine Band and has hosted Horn Wallow, an annual student recital, for over twenty years. She is on the faculty at Washington Adventist University and at George Mason University in Fairfax, VA. In 2017, she will be co-hosting Horn Day at Mason – a day celebrating all things horn. As a subject matter expert on up beats, she gave her semi-serious lecture, “Why, Mr. Sousa? Why?” Off-beats: Thorn of the Horn! at the Southeast Horn Workshop at James Madison University, VA in March, 2017. Amy has interviewed for and been interviewed by the professional journal of the International Horn Society, The Horn Call. In the summer of 2017, she was a featured guest artist in two horn workshops, Horncamps! in Daytona Beach, Florida and DC Horn Choir Camp in Washington, DC. She also joined the faculty at the venerable New England Music Camp in Maine. In addition to George Mason and Washington Adventist, Amy is on the faculty at The Washington Conservatory of Music, Washington, DC with whom she has formed Capital Horns, a horn choir. She resides in Burtonsville, MD with her husband Ed Kelly and two ten pound dogs and thanks her teachers from the past especially, Herb Spencer, Ted Thayer, Greg Miller, Martin Hackleman, and tubist, Dave Fedderly.