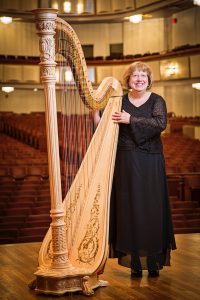 Wanting to serve her passion for teaching full-time, Elizabeth Blakeslee recently retired as second harpist with the National Symphony Orchestra, a position she held for seventeen years. She has been Harp Professor at George Mason University since 2012 and in 2016 was appointed Harp Professor at Washington Adventist University.  Fall 2016 marked the inaugural season of the AYPO Harp Ensemble, with twelve talented young harpists. She also maintains a private studio of about 30 harp students.

Ms. Blakeslee received her Bachelor of Music degree at Auburn University under the direction of Marjorie Tyre and her Master of Music degree at Virginia Commonwealth University under the direction of Marilyn Costello. She has held principal harp positions in the Richmond Symphony Orchestra, the Orquesta Sinfónica de Colombia, and guest principal harpist with the Kennedy Center Opera House Orchestra. Ms. Blakeslee was the harp instructor at the Shenandoah Conservatory of Music in Winchester, VA from 1996 until 2008

Ms. Blakeslee has served the American Harp Society (AHS) in many capacities including Secretary, Publications Director, and Mid-Atlantic Regional Director. She was also on the Board of Directors for the Virginia String Teachers Association (VASTA) and was named VASTA Outstanding Studio Teacher of the Year in 2011. She was also the chair of the harp committee which developed the harp curriculum for the ASTA Certificate Advancement Program curriculum. Ms. Blakeslee is also active in the Music Teachers National Association (MTNA), serving on several national committees. She is also a Nationally Certified Teacher of Music through MTNA.

Her students have won competitions at the local, state, national, and international levels and have been accepted to the top conservatories in the nation.