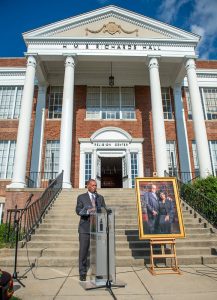 On a sunny Sabbath afternoon, below the pillars of H.M.S. Richard’s building, a group gathered to honor the lives of Henry and Sharon Fordham in a department naming ceremony. A framed portrait stood symbolically at the base of the historic steps. After the Fordham’s tragic loss, Washington Adventist University decided to name their Religion Department in honor of the Fordhams and their indelible presence in ministry and the spread of the gospel. 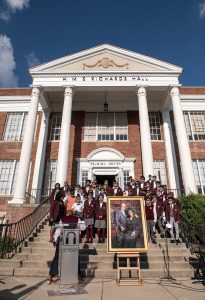 At the base of the steps, President Weymouth Spence welcomed the crowd to campus. Board Chairman Dave Weigley offered remarks, and Department Chair Bogdon Scur defined the Department and the plans for its future. Musical selections were provided by WAU’s ProMusica, a 40 plus member choir from G.E. Peters Adventist Academy, Pastor Ramone Griffith, as well as a piece performed by Abner Marquez and Jidong Zhong. 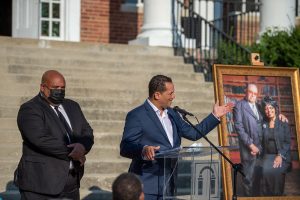 Personal testimonies were offered regarding Elder Henry & Sharon Fordham’s ministries both together and as individuals. These testimonies were provided by Dr. Ronald Anderson, Dr. Gene Donaldson, and Mrs. Dahlia Palmer. In addition, Shawn and Joey Fordham offered a response. Shawn Fordham said, “To have this Religion Department this inside this H.M.S. Richard’s building, named after both he (Henry Fordham) and my mother (Sharon Fordham), is special because they approached ministry as a team. 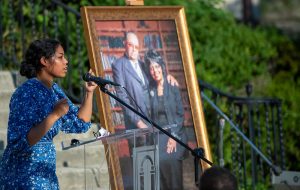 A special poem entitled “Who is the Gospel” was written and recited by WAU Student Jenevieve Lettsome.  Pastor Ramone Griffith, a recent WAU Alumnus, gave his vision and testimony as Elder Fordham led him at the beginning of his ministry. 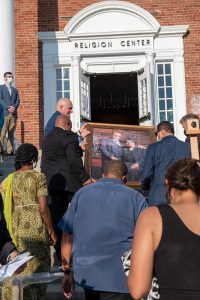 The ceremony culminated as Board Chairman Dave Weigley invited the Fordham Family and members of the Religion Department to carry the Fordham’s portrait up the stairs to its place of honor in the entry of Richard’s hall. Religion and Theology Students lined the steps as the procession of attendees followed the group up the steps. The ceremony continued as the department students were asked to kneel amid the crowd filling the entry. Charging words and a special sending were then offered by Provost Cheryl Kisunzu, President Weymouth Spence, and Board Chairman Dave Weigley. The crowd then offered a responsive prayer of dedication for the Religion Department and the students it represents. 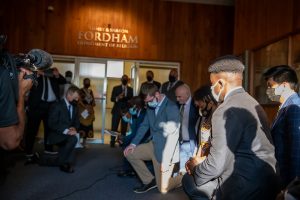 Washington Adventist University’s Henry and Sharon Fordham Religion Department is currently growing its urban ministry educational focus. The legacy that this new naming represents offers inspiration for its students and faculty as they endeavor to be a beacon for future students who wish to impact the ministry by spreading the Gospel of Jesus Christ.

The event can be viewed at: https://www.youtube.com/watch?v=1R9RxCNz8Ag&t=579s

Thank you to the Alleghany East Conference of Seventh-day Adventist’s Media team for recording the event. And thank you to Randolph Robin for the event photography.

A FULL PHOTO GALLERY CAN BE FOUND HERE