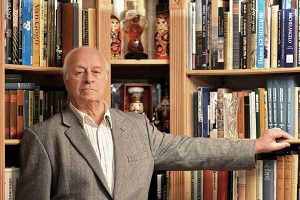 Dr. Victor Yuzefovich was born and raised in Moscow, Russia.  After receiving his Undergraduate degree in Music Performance, Music Pedagogy and Musicology at the Gnessin Music Institute, he went on to earn his Honors Diploma from the State Gnessin Music Academy.

The different sides of Dr. Yuzefovich’s work became entwined and beneficiary to one another.  His research about the Moscow school of violin playing in the beginning of the XXth century and its leader Ivan (Ian) Grzhimali went far beyond the normal requirements for a diploma, and was soon published.

For fifteen years Dr. Yuzefovich served as the Assistant Principal violist in the Central Radio and Television Symphony Orchestra of the USSR, his participation on its Artistic Board,  and his active participation in various chamber ensembles not only widened his knowledge of music, but also helped shape his future profession as a musicologist whose main interest is focused on the issues dealing with the Art of Performance.

The interest to these issues once again brought Victor Yuzefovich to the student bench.  This time it was to receive an Undergraduate Degree in History of Theater, Music and Theater Criticism at the Lunacharsky State Theater Institute.  The Theater department became for him an ideal place to hone his skill as a performance critique – both musical and theatrical. A close collaboration with the leading magazines of that time – “Theater”, “Theater Life”, “Sovietskaya Myuzyka” and “Musical Life” sharpened his pen as a critic, having allowed for a switch from the art of performing to the art of musicology.  He would later lead a seminar on critique at The State Gnessin Music Academy. His diploma work on Michael Chehov contributed to the beginning of a long journey exploring Russian Culture abroad.

For almost two decades, Dr. Yuzefovich worked as Chief of the Performing Arts section of the leading musical Magazine in the USSR – “Sovietskaya Muzyka” (“Soviet Music”).  While there, he found himself in the epicenter of the country’s musical life, having regular conversations with the most renowned musicians, both Russian and foreign. On numerous occasions, he represented his magazine abroad on trips to International Music Festivals, participated in National and International Music Congresses and Conferences.  Dr. Yuzefovich was the initiator of the “Round Table” discussions among the jury members of The International Tchaikovsky Competition in Moscow, actively published his work in music magazines across the world. During these years, he completed his book “David Oistrakh”, which was published in USSR, Germany, UK, Bulgaria and Hungary.

The scholarly interests of Dr. Victor Yuzefovich are not limited to just Performing Arts.  This, in part, is clear from his dissertation “Hector Berlioz and his symphony Harold in Italy“, which earned him a Ph.D. in Musicology from the Moscow Tchaikovsky Conservatory in 1972.  Another example is his book “Aram Khachaturian”, published in USSR, Japan, and USA.

In 1991, Dr. Yuzefovich’s work on a book about Serge Koussevitzky him to the United States as a winner of a fellowship from the Woodrow Wilson International Center for Scholars in Washington, D.C.  His work as a consultant at the Library of Congress resulted in the organization and systematization of the gigantic Koussevitzky Archive.

While concluding his work on Koussevitzky, the first volume  of which (“Serge Koussevitzky – The Russian Years”) was published in Russia in 2004, Dr. Yuzefovich became the initiator of a much broader project – “Music of Russians Abroad“.  This project has already been endorsed by the Russian Institute of Art, and the State Glinka Museum of Music Culture.  To find out more about this project, please click on the above link.