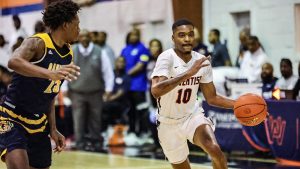 WAU Shock defended the house against the Oakwood University Ambassadors recently with a 80 – 72 final score.  Senior Ethan Murphy scored a game-high 20 points in the Shock’s season-opener to lift WAU over Oakwood University (0-1) in Saturday’s inaugural Homecoming at The Pitt.

On a night full of passion, perseverance, and school spirit, WAU displayed the definition of teamwork with 42 rebounds, twelve steals, and nineteen assists on the night.  The Shock scored the opening bucket with a made free-throw by Mo Bundu 13-seconds into the game, setting the tone for the night. WAU went on a 10-0 run before the Ambassadors ended their drought with a layup. However, the Shock maintained control keeping a comfortable lead. Christian Magruder caught fire, scoring 15-points in the first 20-minutes and giving WAU the 46-35 advantage going into halftime.

The Shock dominated the majority of the second half, pushing the lead to as much as 12 points. However, the Ambassadors did not go down without a fight. Oakwood closed the gap and brought the game within 3-points with ten minutes left in the game.

WAU sparked a 10-0 run to take a 71-61 with six minutes to go. The Shock finished 40.3 percent from the field and added 18 bench points. WAU forced Oakwood into 28 turnovers, converting into 30 Shock points leading to victory.