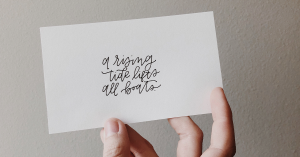 When I was growing up, my dad’s family would always talk about Washington Adventist University (WAU), then known as Columbia Union College. It was where they had all met their spouses and had their weddings; my dad was even Student Association (SA) president. My family had gone to school with half the professors, and they were friends with the other faculty. At Sligo Church, I was known as “the Carreno kid.” Most people at WAU didn’t bother to remember my first name once they found out who I was- or more accurately, who I was related to. I hated living in my family’s shadow.

So, I did everything possible to avoid going to WAU. I applied to places that were thousands of miles away from Maryland; I even declared a major that WAU didn’t have. I applied to places where nobody knew my family. I lined up scholarships at Pacific Union College, traveled all over the world with my choir in high school, and looked at universities abroad. With each trip, I tried to convince myself that WAU was too small for my dreams. Eventually, I also lost my faith in God as, one by one, my other college applications fell through. Transcripts mysteriously disappeared, application fees that I thought were waived were suddenly due, and some applications were never even received. I couldn’t see what God’s plan was, and I felt He had abandoned me – so I abandoned Him first.

Through it all, my parents kept the faith. At one point, they made me call an older cousin of mine, who had just gotten his doctorate in composition- the degree I was pursuing. The first words he said were, “If you want to go to an Adventist school, you have to go to WAU.” I begrudgingly accepted and agreed to a meeting with Financial Aid, on one condition: if I didn’t get a full scholarship, I wouldn’t go. But once I agreed to that meeting, it seemed like everything else snowballed into place. The music department agreed to modify a major for me that included my career of choice and gave me a scholarship. I got state grants and even more scholarships, all of which added up to full tuition. God had met my challenge.

After arriving, I met a wonderful group of people who helped me renew my faith in God. I accepted His role in my life and recommitted myself to Him. I became a person outside of my family’s shadow, and I am finally on the right path to achieving my dreams of becoming a composer. And I did all of that not in my family’s name, but the name of God.