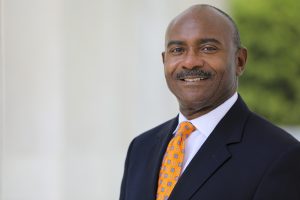 Ralph E. Johnson is a 1981 graduate of the University of Alabama with a BS degree in Speech/Language Pathology. In 1982, he received his Masters degree in Student Personnel Services from Florida State University. He took his first professional position at the University of Arkansas in 1982, as Coordinator of Greek Affairs.

In 1985, Dr. Johnson began a nine-year tenure at the University of South Carolina as the Assistant Dean of Student Life and Director of Minority Student Affairs. In that capacity, he worked with over 3,000 African American students enrolled at USC and implemented several model programs that impacted minority student retention. He received his Ph.D. in Higher Education Administration from the University of South Carolina in May of 1993. His dissertation, titled “Factors in the Academic Success of African American College Males,” garnered him the coveted Dissertation of the Year Award, given by the Southern Association for College Student Affairs (SACSA). From 1985 – 1990, he served as the Director of Multicultural Student Affairs at the Johns Hopkins University, and from 1990 to 2010, he served as the Associate Dean of Students at that same institution. In 2010-2011, he completed a one-year term as the Interim Provost at the Washington Adventist University. In 2012, he was appointed Dean of the Center for Student Success, and he now leaves that role to become the new Vice President, Center for Student Life.

His professional and civic activities include the National Association of Student Personnel Administrators (NASPA), President of the Southern Association for College Student Affairs (SACSA), Treasurer of the SACSA Foundation, and Chairman of the Alpha Phi Alpha Education Foundation Board of Directors. Moreover, in 1998 he created the Alpha Phi Alpha College Chapter Leadership Academy, which he still directs and in 2003, the Delta Lambda Chapter Beautillion, a program designed to assist male high school juniors and seniors in the Baltimore area transition from adolescence to adulthood and into post-secondary education. He is the author or co-author of several articles and/or book chapters, to include “Advising Black Greek-letter Organizations: A Student Development Approach” in Black Greek-letter Organizations in the 21st Century: Our Fight Has Just Begun, ed. GS Parks (Lexington: University Press of Kentucky, 2008). He is past Chairman of the Board of Directors for the National Society of Collegiate Scholars and a member of the Board of Directors for the Council for the Advancement of Standards (CAS) in Higher Education, currently serving as the Member-at-Large for Administration (Secretary/Treasurer). He was recently voted President-Elect of CAS and will assume that role this September and transition to President in September of 2021.

Dr. Johnson is the recipient of numerous honors to include his induction into Omicron Delta Kappa National Leadership Honor Society, the SACSA Melvene D. Hardee Award for Outstanding work as a student affairs professional, and the 1991 National Alumni Brother of the Year for Alpha Phi Alpha Fraternity. Dr. Johnson enjoys literature, writes poetry, and is an avid fan of old movie classics and has an immense passion for leadership and student development. He also enjoys traveling and was awarded a Fulbright scholarship for international educators that took him to Germany and Belgium in April 2002. Additionally, Dr. Johnson developed the Hopkins Ghana Study Tour in 2002 and led six tours to the West African country. Dr. Johnson is a member of the Emmanuel-Brinklow Seventh-Day Adventist Church, where he serves as a deacon. He is married and the father of one son, a graduate of Oakwood University.

“His intentionality towards the best results for our WAU students, and a steadfast drive towards elevating the student experience has led to this new leadership role. We believe God will bless WAU through Dr. Johnson’s love for our student body,” says President Weymouth Spence.