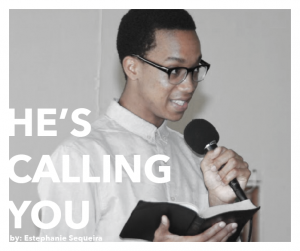 Javel Walcott was born and raised in Philadelphia, Pennsylvania, where he lived with his mother, grandmother, and step-grandfather. Although he was raised in a Seventh-day Adventist home, the church did not interest him, primarily because he did not fully understand its concept at such a young age. It wasn’t until he turned ten years old when he started to become curious. During his early teenage years, his interest intensified. Around fourteen, he accepted an appeal and about two years later, he took the ultimate decision to become baptized and accept Christ as his personal Savior. A year later, Walcott became a part of a canvassing group known as Pennsylvania Youth Challenge (PYC) and it impacted his life. He described it as a place where youth can dedicate an entire summer to the Lord, but also spend a summer along with other young adults who can ultimately become life-long friends.

After PYC, his next step was college, to which he choice Washington Adventist University. For a while, Walcott wanted to pursue criminal justice and eventually become a police officer, but then God placed a different calling in his heart—ministry.

Walcott prayed and asked God to show him if he wanted him to pursue ministry. The power of prayer manifested and it became clear that pursuing ministry was his the right choice for his life. Walcott recalled this wasn’t the path that he initially had in mind, yet he was open and willing to step into whatever God had in store for him. God works in mysterious ways. The path may appear unclear, yet the more we walk on it, the clearer the path becomes.

Doing great things can require great sacrifice. Walcott explained that there has been obstacles along the road but not with the program or university, but in personal growth. The refining process has broken Walcott down at times, but he has never found himself defeated. The things we hold onto can get in the way of what God is trying to give us. Since being here, Walcott recalled that he was able to learn about true faith and the importance of studying God’s word for himself.

One of his biggest lessons was realizing that being theology student does not always mean becoming a pastor of a local church. In fact, theology can lead to many different roads of ministry. Walcott desires to in the  ministry, whether it’s pastoring, missionary work, or as a bible worker.

You do not need to be a pastor, missionary or anything theology related to come in contact with God. He wants a relationship with each individual regardless of what career or calling they pursue. Anyone can speak; They do not need a license or piece of paper that says they can. So, go ahead and speak life. The world needs more voices that will echo His love and truth.