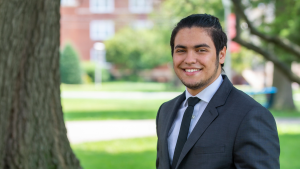 Since the semester has started, Student Association President, Filipe Cioni, has been dressed in a suit and tie. He dresses up for success consistently, and that alone is admirable. Considering the times we are living in, with zoom calls muted and videos turned off — it’s nice to see a young man dressed for the day and moving with purpose, nothing is stopping this guy!

Filipe was born in Brazil and began his education there. When he started high school, he received a scholarship to attend. Unfortunately, the scholarship fell through and he couldn’t afford to finish school anymore. This was a trial in Filipe’s journey that was hard to overcome. Thankfully, Filipe didn’t give up and decided to get his GED and he passed! Although he was grateful, not having a diploma gave him doubts about being accepted into college, “I didn’t have a ‘real’ certificate” he mentioned, “so it had me feeling down and worried.” Despite his doubts, God had other plans.

Washington Adventist University decided to give Filipe the opportunity and accepted him into the school’s program. “WAU showed me that it didn’t matter if I had a GED or not, there is way more to my worth.” Since being accepted into the university, Filipe says he loves it! “It’s the opportunities and the environment! You can be friends with everyone. It doesn’t matter if you’re a musician, or if you’re a basketball player or soccer player — You can be friends!”

As Filipe continued his time at WAU, he felt the calling to do something more for the students. Great things continue to happen at the university but there is always room for improvement. Filipe decided to put his thoughts into action by running for Student Association President and was voted in! “You have to be ready to give what it takes to make changes. And I felt that I have what it takes. I want to make changes as a president or not! It doesn’t matter if there is a title — Just last semester I started a petition to open the gym early in the morning for students that wanted to exercise before their classes and it worked — the gym was open for the rest of the year. That was before the presidency.”

Becoming the SA President was exciting for Filipe and the team he created for the Student Association…but then COVID-19 hit. It felt as if everything came crashing down — all the plans they had made and all the events that were scheduled seemed to take a turn for the worst. “It was really important for me to have a team at that moment,” Filipe says, “because of the mix of different visions, we could see that everything wasn’t crushed, it wasn’t all done. We just needed to move from a different perspective.”

Filipe believes that what the students need is “Spirit of Community” now more than ever. Since everything is virtual, one may start to feel alone or depressed. “It’s really hard for students right now.” He mentions, “People need company and even though no one is around physically, there is still access to friends in many other ways, check up on people and make sure they are okay.”

Filipe’s advice for students during this time is to not take virtual learning for granted. “Even though everything is online and on the computer, get your textbook and write down notes. It’s important. Don’t let yourself get lost in the middle of this new virtual phase. It’s so easy to just block your camera and your mic to do something else but don’t lose focus on your classes. Take it seriously, like you’re on campus, because your grades would be taken seriously.”

Felipe wants all students to know that he and his team are here for them and they can contact him anytime at fcioni@wau.edu or give him a call (even if it’s late night!) at 301-844-1551

The student association president and his team are here for their peers and committed to being the leaders for their voices during the times ahead.