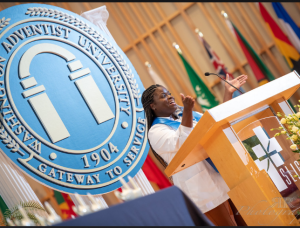 Twenty-six year old Oletha Pitters began her schooling on Carroll Avenue, attending both Sligo Adventist School (now TA Prep) and Takoma Academy. She broke away from the avenue when she attended Bowie State University for a semester, “I went to Bowie State University for about a semester where my major was nursing. However, after being there for a semester, I realized that I needed to take a step back and go to the drawing board to assess my steps in terms of how I was going to get through nursing school.”

From Bowie State University, Oletha transferred to Prince George’s Community College (PGCC). While attending PGCC, she worked two jobs and attended class, “I did GrubHub. I did Uber Eats. And in addition to doing that, I worked at Dollar Tree…You’re looking at a person who came from Dollar Tree to Registered Nurse.”

Oletha was working two jobs and taking classes part-time until two and a half years ago when she made the decision to work to get accepted into nursing school. During that time, she prayed that God would help her; there were just eight classes standing between her and the nursing program of her choice. So Oletha made a tough decision, she buckled down, taking four classes in the summer and four in the fall and pulled her GPA up from a 2.8 to a 3.2 (2 points above the required 3.0 GPA). Oletha finished her time at PGCC with two associates degrees: one in Health Education and the other in General Studies.

When asked what kept her going through those two semesters, Oletha’s answer was simple yet heartbreaking: her mother. When Oletha was fifteen years old, her mother–who was also a nurse–passed away from a brain aneurysm. It was her mother’s goal to attend Washington Adventist University and become a Registered Nurse. “Seeing her love, her care, her commitment to wanting to help people really inspired me from a young age,” said Oletha, “And because she was such a loving person, I knew right away that I wanted to become a nurse. But what I loved, most important is that I was able to find my own passion for nursing.”

Oletha wanted nothing more than to be of help to those around her. For her, nursing was the best way she knew to help those in need, “It’s a very critical time where people are oftentimes down, they feel alone, they’re not at their best, and the only person that some people have are nurses. We play a vital role in helping to change their outcome.”

Through prayer, trusting that God would direct her on the right path, and following the dream that her mother never had the opportunity to follow, Oletha made the decision to attend WAU’s nursing school. Speaking on her experience at WAU, Oletha said the following: “Starting off, I was optimistic because I had failed so many times before in the past. And before you can be a winner you have to accept being a failure. And so because I had failed so many times, I knew that this time around, no matter what it took, God would have helped me persevere and get through.”

And persevere, she did. During her time at WAU Oletha never failed any classes. She credits her success to the family unit she built with her peers, the instructors’ commitment to including God in classes, and her father’s wise words: “Do everything that you need to do to pass the exam. When you do your part, you give something to Jehovah to bless.” On July 8th, Oletha Pitters took the boards for the first time, and passed!

For her fellow nurses, Oletha has offered fantastic advice, “Go with confidence because this is what you are destined to do. Find good people. At the end of the day, it takes a village. And without my peers, honestly, I don’t know if I would have this success story to share…Work hard. Nursing school isn’t easy–it’s not for the faint of heart–but if you are committed to finishing on time, you can and will do it…Believe in yourself. God didn’t bring you this far to leave you, so believe that you will succeed. Believe that you make it across that finish line. Last, but not least, trust in God. At the end of the day, without Him, you are nothing. Trust in Him because He is in control.”

This year, Oletha Pitters won the leadership award. “It was definitely a surprise. It was a surprise because of the person who I was before,” she said, reflecting on her accomplishments, “I was very shy. I wasn’t outgoing. I didn’t even see myself as a leader. I realized that coming to a school that helps to build those qualities in you and having peers who see something special in you can definitely change you and bring that out.”

Today, Oletha is working at MedStar Georgetown University Hospital in the OR. She is grateful for her time at what was formerly known as Washington Adventist Hospital for her training in the OR during her externship because the knowledge and skills she obtained there have made a difference in her performance at Georgetown. Before signing off, Oletha had a few last words to say to her fellow nurses, “Aim high. You can do it. Keep those grades up. I’d love to see more of my fellow Washington Adventist University nurses working at magnet institutions because they can do it.”

Oletha would like to give a special shoutout to Chevean Richards, her advisor at Prince George’s Community College, who was truly an asset to where she is today!

Thank you Oletha for sharing your inspirational story and your wise words with us. We congratulate you on your many accomplishments as a nurse and are looking forward to seeing what great things the future holds for you.