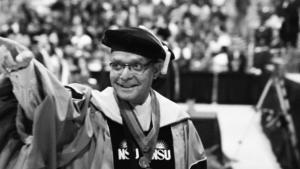 As Black History Month comes to a close, we would like to acknowledge a significant figure in Washington Adventist University’s history; the 19th President, Dr. Weymouth Spence. Dr. Spence is not only the 19th but the first black president of WAU. He became president in 2008 and continues to lead.

Dr. Spence has had many accomplishments since becoming president, including having the largest enrollment in 2012 and the largest graduating class. These accomplishments really emphasize that his genuine focus is on the success of the student body. We couldn’t be more proud of what he has done, and we are excited about the vision he has for WAU as we move forward in this new decade.

It wasn’t always easy for Dr. Spence, he came from a humble background. As an immigrant from Jamaica, many thought that he wouldn’t be where he is today. Still, with the help of God and a drive to change the world (especially in higher education), he accomplished more than his ancestors dreamed of. Though there were obstacles, what really helped him through was his hero Jesus, who he believes that modeling His life and teachings is the answer to every problem.

This vital piece of WAU’s history is truly an inspiration. No matter what race, background, or gender you are – you can accomplish everything you’re meant to. The road may not be easy, but it’s worth fighting for. If God is for it, who can be against it?

All over the world, there are (still) issues with inequality, racism, and sexism. Here on WAU’s campus, we want to continue to fight those issues every day. WAU is one of the most diverse schools in the area, and as it continues to grow, we hope that it will continue to support the unity that we all want to see worldwide!