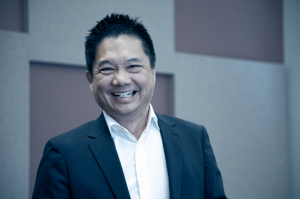 Dr. Daniel Lau is a concert pianist, and the current chair of the Music Department at Washington Adventist University. He is married to mezzo-soprano Kyle Engler, who teaches at McDaniel College, and has a thirteen-year old daughter named Channing. His boxer-beagle dog named Kodi, and his three cats Moxie, Creamsicle, and Luna are also a part of the Lau family. From a young age, music was embedded in him and continued to flourish as time progressed.

He was born in Hinsdale, IL, and grew up in Loma Linda, California. There, he attended Loma Linda Academy, where he was active in student government, drama, varsity basketball, in the orchestra as a violinist, and was the pianist for the choir.

Lau obtained his degree in Piano Performance/Pre-med at Loma Linda University, and then continued his education at Peabody Institute of the Johns Hopkins University, where he earned both his Master’s degree and Doctor of Musical Arts. While he was pursuing his doctorate at Peabody, he also had the opportunity to teach at Columbia Union College, where he worked as an adjunct professor.

After he completed his doctorate, he worked as a concert pianist, opera conductor, collaborative pianist, and piano teacher. In 2008, he was offered a full- time position at Washington Adventist University to join the music department. Dr. Lau recalls that working at Washington Adventist University became his dream job, and he was thrilled about working alongside talented musicians.

In 2017, Dr. James Bingham retired, and Dr. Lau was promoted to be the chair of music. Dr. Lau stated the following: “Taking over this department from a legend like Dr. Bingham was intimidating in some respects, but I viewed it as a tremendous opportunity.” Now going on his third year as chair, he only desires to creatively build on the legacy of excellence left by Dr. Bingham

As a precursor, Dr. Bingham had set the foundation for future generations. While Dr. Bingham was at Washington Adventist University, The Leroy and Lois Peters Music Center was established. In addition, in 2013, the department obtained National Association of Schools of Music accreditation.

As stated before, The Peters Music Center, which was founded in 2013, is an excellent space for rehearsals and teachings, yet it lacks a dedicated performance hall. Dr. Lau mentioned that he can visualize this hall as one that can “showcase the department’s music making in a “visually, beautiful, and acoustically pleasing way,” .

Most recently, in April of this year, the department received the American Music Therapy Association approval to offer a Bachelor of Music in Music Therapy as a degree. Ultimately, when the Music Therapy program officially sets in motion in January 2020, the University will hold the distinction of offering the only such program in the State of Maryland, and the Seventh-day Adventist tertiary system in North America.

Dr Lau describes the department in two words: Rigorous and supportive. He stated the following: “We expect results from our students, and we believe success comes from a curriculum that is challenging and innovative presented in a supportive environment.”

In addition, Dr. Lau also stated the following advice for incoming music students: “ Take piano lessons if you have the opportunity. No matter which area of music you wish to focus, piano will be helpful when it comes to the rigor of WAU’s music programs.”

His passion has and always will be music. In fact, he continues to perform professional concerts every year, often as a chamber musician. Dr. Lau recalled  that “being able to make a living as a musician is a blessing that I do not take for granted. To be able to share my passion and expertise as a musician is a special privilege. To be able to share it with the talented and committed students makes me more excited to come to work every day.”

Thus, dreams are not meant to be stored in dusty bookshelves, rather they are meant to be published for the world to see. The power invested in music can inspire the world. Likewise, the music department at Washington Adventst University desires to deliver a message of love and hope to a dull world.