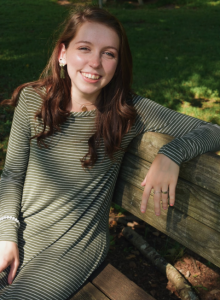 Bethany Sheridan is currently a junior at Washington Adventist University pursuing her dream, a degree in social work. She particularly chose to study social work for two primary reasons: First, because it was personal, some of her closest friends and family were sexually assaulted, and their stories impacted her decision. What has driven her more is the fact that none of these individuals received justice, and their voices were never heard. Secondly, when she was introduced to the topic of sex trafficking, becoming aware of how people were affected by it gave her a life-changing epiphany: social work was the right path to take. This degree would allow her not only to grow as a person, but to become the voice of those who do not have one.

Pursuing social work hasn’t always been easy. Sheridan mentioned that it has challenged her values and belief system. In others words, she needed to figure out how not to impose her belief systems onto her future clients. Thus, this field of study took her on the road of self-discovery. She believes that it’s challenging, but enables one to ultimately grow. For example, Sheridan’s adviser Dr. Melissa Buckley had challenged her to face her personal issues. She advised her to go to counseling and through the sessions, she grew to better understand herself and help others more sufficiently in the future.

Her ultimate goal is to open her own non-profit for victims coming out of sex trafficking.  In addition, she desires to become a public awareness speaker where she can advocate on social issues such as sex trafficking, domestic violence, and trauma that children endure Sheridan also plans on helping kids by writing books. Her goal is to target different experiences that children go through, ones that adults may not have explanations for. As a matter of fact, she already got a head start and has written her first children’s book, which encourages children to remain hopeful in the difficult seasons of their lives.

She has a strong passion for writing. As much as she enjoys social work, writing has been her constant escape. She doesn’t view writing as a chore, but enjoys every minute of it. Whenever she has free time or merely feels inspired, she mentioned that she writes. Indeed, intertwining both of her passions is her ultimate dream.

As college students, it’s normal to feel overwhelmed at times. Whether it be grades, finances,  or even choosing a major. Despite these challenges, it’s crucial to keep the dream alive. Dreams will only fade if there is no one there to chase them. Sheridan stated the following advice to anyone who is wanting to fulfill their dreams. “If there’s a dream that keeps you up at night or lights your passion during the day, pursue it—even if others have no idea how you’ll do it.”

Here at Washington Adventist University, we encourage students to chase their dreams, even if it requires you to take a couple leaps of faith. If there are risks involved, it’s better to take the risk than to remain stagnant.