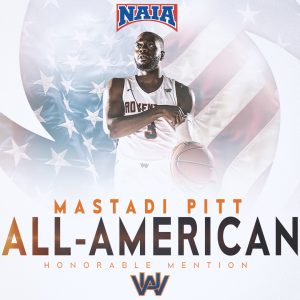 Meet the Scholar Mastadi Pitt Behind the All-American Honorable Mention by the National Association of Intercollegiate Athletics (NAIA).  Norfolk State University transfer Mastadi Pitt is a Business Management major student at Washington Adventist University.  He has a long-standing relationship with coach Jerry McFarlane, from the age of 16, where McFarlane was a mentor to Pitt in the program Team Loaded. This relationship helped Pitt to make an easier transition to WAU. Pitt attests to the positive impact Team Loaded had in his life.

Coach Jerry McFarlane joins in congratulating Pitt on his hard-work. “I have seen Mastadi grow in many areas. The smaller academic environment as well as the overall leadership of the University has given him an opportunity to be successful.” says McFarlane. “He has matured and does a better job of holding himself accountable.” The latter being his driving force more than anything, according to McFarlane. He adds “Impactful leadership starts with his willingness to help others and think more about others than himself.”

Pitt joined WAU’s Basketball team in Fall 2019. Dwayne Garner, teammate and roommate of Pitt shares “Mastadi and I came to WAU together and we’re roommates. I enjoyed being around him on and off the court. He’s an all around fun guy who is very passionate about basketball. He’s taught me lessons on the court and off. Thankful to be able to call him my brother.”

The global pandemic brought cancellation of games due to players being infected with COVID-19, including Pitt. He also had a recent ankle injury that precluded his participation in several games. Other challenges were the constant travels for back-to-back games, while also working to maintain a good academic report.   Pitt shared being shocked when he was nominated. This was unexpected because of the previously mentioned challenges faced during and leading up to this season. His message to the readers is one of resilience. “Fight through adversity,” he says. “Anything God throws at me I can do because He’s not gonna give me something that I can’t handle.”

To Pitt, Basketball is more than a sport, “it means everything to me.” he says. “It’s my escape from reality. I am most at peace on the basketball court. I have loved it since I was six years old. It is like therapy for me.”   He is thankful for the doors the sport has opened in his life, giving him a shot to pursue higher education. He also shared how basketball has helped him avoid bad influences and stay on the right path. “The work starts before the season even begins,” Pitt says.

He further expands and shares what keeps him going: