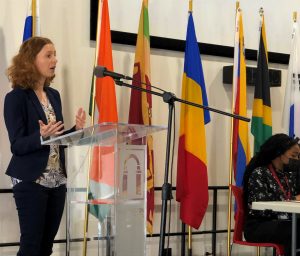 Marianne Laruelle, from the Belgian Embassy in Washington, delivers the Keynote Address

On April 14 the WAU Honors College hosted the 4th Annual CAPITALMUN conference on the campus of Washington Adventist University. This year’s conference welcomed delegations from 38 countries and included students from Adventist and public high schools in Maryland and Pennsylvania. The conference began with an Opening Ceremony that featured a Keynote Address by the Honorable Marianne Laruelle, the Political Counselor for the Belgian Embassy in Washington, D.C. Ms. Lareulle stressed the importance of international cooperation around the world when dealing with important international issues. The Opening Ceremony also included an emotional testimony from 19-year old Sultana Amani, a refugee from Afghanistan who, along with her entire family, was on one the last planes out of Afghanistan last August. She encouraged the attendees to remember the plight of those who are living through very difficult times around the world, saying ‘we are all humans — when one person suffers, we all suffer.’ 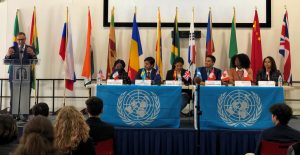 WAU President speaks at the Opening Ceremony of CAPITALMUN 2022

The theme for CAPITALMUN 2022 was ‘International Cooperation for a more Sustainable Tomorrow’ and featured formal debates on topics including Saving our Oceans, Promoting the Economic Empowerment of Women, Human Rights in Afghanistan, and Standards for International Intervention. Throughout the day, students debated these topics while trying to accurately reflect the positions of the countries they were representing.

‘I think the best part of CAPITALMUN is that we get to debate from a different perspective,’ said one delegate from Pine Forge Academy. ‘I really got to learn a lot about the country I’m representing and how their views might be different from mine.’

Another delegate from Highland View Academy said, ‘So many of the delegates here have taken this conference really seriously. They are proposing some really good ideas about how to solve real issues. It’s so exciting!’

‘I really enjoyed the day,’ added a delegate from Atholton Adventist Academy. ‘I actually wasn’t signed up to attend but changed my mind at the last minute after Dr. Scriven came to our school to promote the event. I’m really glad I came.’

Model United Nations (MUN) is based on the activities of the United Nations. Students take on the role of diplomats from countries all over the world as they discuss and debate significant global events and crises. During a typical conference, participants work together to propose solutions to some of the world’s most pressing problems. Washington Adventist University is the only Seventh-day Adventist college or university with an active MUN program. 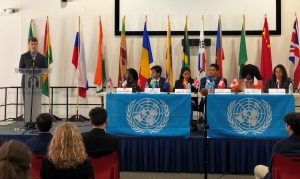 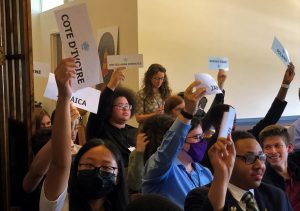 Delegates vote on an amendment to a Resolution at CAPITALMUN 2022 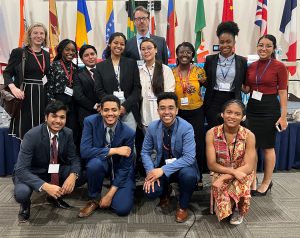 The WAU Honors College administrative team that organized and ran the CAPITALMUN conference.

For more information or to find out how you or your school can participate in future CAPITALMUN conferences, please contact Dr. Jonathan Scriven at jscriven@wau.edu.