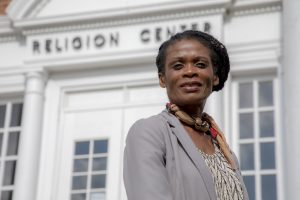 “Women are a minority in the theological world and religious clerical profession. I don’t function as a minority, though,” says Dr. Olive Hemmings, newly appointed Chair of the Religion Department at Washington Adventist University.

Dr. Hemmings joined the faculty of WAU in 2002. Just before that, she was finishing her Ph.D. at Claremont Graduate University, where the Department Chair at the time was lining her up to teach at Calvin Theological Seminary upon degree completion. Propitiously, on the day she completed all the coursework for her program, she got an email from the Chair of the Religion Department at WAU, then Columbia Union College, just after handing in her last paper. This email was an official invitation asking her to consider joining the Religion faculty as the new Ethics and New Testament professor. “Having a black female professor was a long shot for CUC at the time,” said Dr. Hemmings. But as God would have it, that was just the beginning.

With history as our trusted source, WAU is reported to be a trendsetter, breaking down barriers and traditional stigmas. So while unprecedented, it is not a surprise that the first Adventist institution of higher learning to admit a person of color and have the first black Chair of a Department is also the one to appoint its first person of color and female Chair of a Religion Department in the Adventist circle of higher education. This distinguished appointment is both historical and revolutionary in the Adventist world of academics. The Gateway to Service strikes again, continuing to be an avenue through which positive and progressive change makes its way into our communities at large.

A word from another woman in leadership, and Provost at Washington Adventist University, Dr. Cheryl Kisunzu, said the following about Dr. Hemmings’s new role,

“We are thrilled that Dr. Hemmings has accepted the invitation to serve as our new Chair for the WAU Henry and Sharon Fordham Department of Religion. Not only is Dr. Hemmings a scholar who contributes rich and compelling theological insights which positively transform our world, but she has a dynamic blend of competencies – such as her passion for urban ministry, pastoral ministry, diversity, and inclusion which ignite in our students clarity regarding their life’s calling and their developing intimacy with Christ. We are especially pleased that as the first woman to chair one of our denominations’ departments of religion – through her leadership, Dr. Hemmings models and actively affirms that both men and women are called to lead ‘for such a time as this’ (Esther 4:14).

While excited about the position, Dr. Hemmings is also mindful of its challenges. As someone who likes to excel in everything she does, she shared how tough this decision was for her. Especially after decades of teaching, the latter becoming her place of comfort, and during a time when she envisioned steering her life in a different direction.

The soil might be foreign, but the flower is still the same. This is not the first time Dr. Hemmings defied the odds and stood out because of her calling. From the very beginning, her field of choice as a woman has guaranteed that she has plenty of opportunities to stand up for herself and, at times, do it alone. While she never questioned her calling, the same was not valid for her colleagues, especially during her first semesters at West Indies College (WIC), now Northern Caribbean University (NCU). Countless times she was approached and bombarded with questions about what she was trying to prove?

Contrary to an endemic plant, Dr. Hemmings has proven to be able to grow and blossom wherever she is planted. At the end of her journey at WIC, she graduated as Student of the Year and had a standing ovation from her entire class, and you guessed it, that included the people who questioned her calling. God has a funny sense of humor.

Those who know Dr. Hemmings know that she is always involved in a project, teaching, preaching or writing yet another article for publication. She is highly involved in ministry preaching all over Jamaica, America, and on zoom, she is on all corners of the earth. On Sabbaths, she facilitates Sabbath Schools and sometimes participates in afternoon forums. Before COVID-19, her Summers were occupied with trips to England to do workshops and Evangelism weeks in London and Jamaica. While COVID-19 has placed a halt on these trips, Dr. Hemmings has found yet another way to spend the Summer. She now serves at Hospitals, providing spiritual care and comfort to those in need.

The sacred text says, “to whom much is given, much is required.” As far as lay interpretation is permitted, we shall appropriate this verse to make sense of how a super-involved leader such as Dr. Hemmings continues to expand beyond herself, allowing God to use her to reach lengths unattainable by human strength alone. It is the commendation that the good Master gave to His faithful servants that we anticipate for Dr. Hemmings, “Well done, good and faithful servant! You have been faithful with a few things; I will put you in charge of many things. Come and share your master’s happiness!” (Matt 25:23).

A well-equipped and competent leader, Dr. Hemmings has enough love and passion for the Gospel and what she does, making her committed to giving it her best shot. She credits her eligibility to her curiosity and enough willingness to surrender. As of now, she is yet to discover God’s intention, but as she said, “when God calls, you better answer.” Her motto has been “follow God as the leaf follows the wind.” After 20 years, she said, “I step into this role as a matter of responsibility.”

If you are a woman and you want to come into ministry, she says, “come to our Religion Department! We will nurture you and make sure you have a place in the field once you’re done.” Dr. Hemmings will not tire of advocating and encouraging women to join the ministry because, as she put it, “the harvest is plenty, but the female reapers are few, and there are some things that only women can reap.”

You have heard the admonition, and for it to be fulfilled, we need more women to also “follow God like the wind follows the wind.” What calling has God placed in your life?

“The way I see Dr. Hemmings is a modern-day prophet that challenges the status quo, speaking out to injustice through her empowering words and wisdom from the Lord. Her background as an African-Jamaican brings light to the theological world because my perspective as a Hispanic-male-American may differ from hers.”

Working now under Dr. Hemmings as my supervisor has been an honor and privilege. I admire her for being hardworking and getting things done in a timely fashion. She is always willing to help despite her hectic schedule. No matter how busy she is, she always has time for whoever knocks on her door. She encourages and inspires me to give the best of myself. And above the virtues she has, I admire the most that God is the center of her life. I pray that God goes ahead of her and prepares her. May all the unnecessary obstacles be removed so she can shine for Jesus and lead this Department to continue to train women and men to make a difference in this world.

As a female in ministry, it is truly inspiring to see a woman like Dr. Hemmings leading the WAU Religion Department. From the interactions I have had with her thus far, she has been nothing but encouraging, uplifting, and welcoming since I was fairly new to the Department. What I most admire about Dr. Hemmings is that she has a passion for the Gospel; in her ministry, she seeks to dispel the misconceptions of God and His character through advocating for the voiceless and speaking on subjects that need to be brought to light. In my eyes, it is truly beautiful to see her paint a portrait of our heavenly Father many can come to admire through the way she lives and interacts with the world around her.