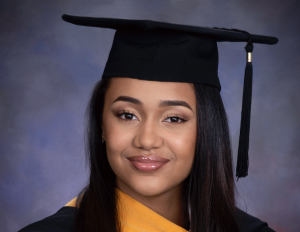 Chynna Smith, Executive Secretary of Student Association, Vice President of Senior Class of 2020, basketball player with the WAU Shocks, Honors College student, and biology major — the list goes on — graduated in Spring from Washington Adventist University. It is our loss and her gain! We will miss the heart and drive that Chynna brought to the campus. She is an inspiration to many, and as the next semester of school is fast approaching, we want upcoming students and readers to be encouraged by her story. Success is in the future, and though we live in trying times, there is still hope to be extraordinary and fulfill life’s goals.

Chynna’s story starts right here in Maryland. She is a Maryland native, born and raised in Silver Spring, MD. Her mom is from the Bronx, and her dad is from El Salvador. She has five siblings. On her mom’s side of the family, many of them were researchers in different ways, and sometimes they would take her to the labs and show her some of their projects. These examples are what set the spark in Chynna to study biology and medicine.

Before studying Biology at WAU, she went to high school at Takoma Park Academy. Closer to her senior year, she began looking at many different colleges. She was in honors in high school and played basketball, so many options were on the table. But when she went to WAU, she had this sense of closeness and a family feel, not only that, but Coach Lyons saw her playing basketball at her academy and wanted her to be a Shock! It didn’t take too long before she realized that WAU was the best fit.

Chynna was proud of her decision to go to WAU. She joined the basketball team and had the time to make lifelong friends (including Monica Chica, a teammate and mentor to her that deserves an honorable mention), learning useful discipline and traveling! One of her favorite trips was going with the team on a mission trip to El Salvador, which is a part of her father’s history. She was amazed at what she learned and the experience she had in her dad’s country. That was an opportunity that she will never forget.

She also appreciates the Honors College and the opportunities they offered to her. Some experiences were out-of-her comfort zone, and it truly opened her mind. The Honors College provided events such as plays, brunches, galleries, and much more that broadened her growth as a scholar.

Chynna truly made the best of her experience in college and the resources it provided. Since graduating, she has an internship at NIH (National Institute of Health) and is working from home for the time being. In her section of NIH, the lab that she researches in studies different cancers through a physics method. It was hard for her to explain in layman’s terms because it’s so physics specific (which baffled me, she was such an intellectual!). The best way to describe what the lab is doing is that they’re trying to learn more about the surfaces of cancer cells to diagnose different cancers faster. It’s fascinating and life-changing work! Thanks to Professor Perez and Dr. Roberts (and many others), she was prepared for this intership and she’s excited for medical school soon after.

Now that she’s finished college, her advice for incoming freshman is:

Her advice on why to come to WAU:

Thank you for coming to WAU Chynna! Congratulations and we wish you the best!