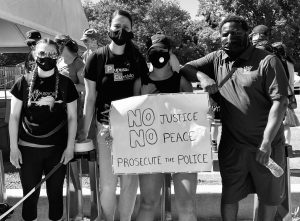 Sunday Morning in Takoma Park I met up with Coach Lyons  and two former teammates Emily and Monica who were also my friends for a protest.

But upon arriving I was literally stunned and had goosebumps all over when I saw the amount of people that were there. People from every race, children, young adults, adults and even elderly!

To see my neighbors and people I’ve randomly come across in the grocery store all in one spot to Protest, was such a beautiful thing — As I was walking I read signs and heard heard chants

“No justice no peace!”

“Hey hey ho ho these racist cops they have to GO!”

The spirit of unity was so strong Iike I’ve never felt before. The love and the support of so many to come out to stand fight injustice brought tears to my eyes

To see they care

Seeing it through videos is one thing but to experience it was like no other.

As  the walk began we cheered and chanted as loud as we could so that those passing could hear us and those driving by could see and hear us.

It was so beautiful to see young children starting a chant, showing confidence and standing up and supporting others!

These kids are our future! And to see them at a young age, fighting against whats wrong…

While walking I saw two children playing, one black and one white, it was beautiful and it made me smile but it also broke my heart knowing that if things don’t change that the little black boy may not  have the same opportunity or same respect because of the color of his skin

I will NOT be silent

When you’re silent what side are you on?

This protest made me stronger, made me more confident and it made me want to be apart of this movement more than I did before I went

That day was memorable

I gained strength and confidence

The emotion It gave me, remembering the pain and hurt I have felt from oppression and racism…

I shouted chants at the top of my lungs when they died down because:

We CANNOT stop until corrupt and racist cops are gone

And we CANNOT stop until there is peace, love, and equality

Therefore we can NEVER stop fighting

Until it’s about one race