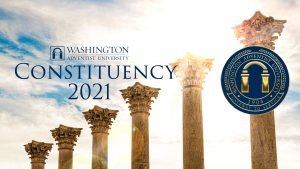 Friday, May 21st, marked the 2021 Washington Adventist University Constituency Session—the first constituency session to be held virtually. Promptly at 12:30 pm, the delegates were greeted by Dr. Dave Weigley, Chairman of the Constituency Committee and President of the Columbian Union Conference of Seventh-day Adventists.

Pastor Don McFarlane, the Interim Senior Pastor from Sligo Seventh-day Adventist church, led out the devotion, titled “The Essentials of the Christian Mind,” alternatively the “Pillars of Washington Adventist University.” He expressed that what makes a Christian distinguishable from a non-Christian is their mind—their beliefs, values, and perspective of the world around them and the people in it. Pastor McFarlane stated, “Washington Adventist University exists because its purpose is not just to prepare young people to negotiate life as we know it here on this earth, but it is preparing them for life now and for eternity.”

After calling the meeting to order and approving the items of the procedure of matters, Dr. Weymouth Spence gave the President’s Report, followed by the Data on Institutional Outcomes and Academy reports presented by Chief Operations and Compliance Officer Janette Neufville and Provost, Dr. Cheryl Kisunzu. “This morning, we will report to you, Dr. Chairman and delegates, the outcomes that clearly indicate that the university is growing with excellence and that the growth is in alignment with the adopted mission vision and core values,” Dr. Spence stated.

The session then moved on to the Financial Report led by the Chair of the Finance Committee and Treasurer of the Columbian Union Conference, Emmanuel Asiedu. Chief Financial Officer, VP Patrick Farley, presented the Financial Report, followed by the Financial Audit and Current Financial reports by the auditor, Ben Kochenower. The Nominating Committee Report was presented by Dr. Rick Remmers, the Executive Secretary for the Columbian Union Conference, and Trustee Lois Peters, the Secretary for the Nominating Committee. Each of the reports above was approved by the delegates of the constituency committee.

Each of the reports stated above (except those from the Nominating and Bylaws Committees) can be found in the Gateway to Service—Pillars of Excellence digital quinquennial report publication. WAU’s focus on the six Pillars of Excellence—Quality, People, Service, Finance, Growth, and Community—has helped increase the performance and outcomes reported in the publication. Nonetheless, WAU aims to produce graduates committed to service and excellence and bring competence and moral leadership to their communities.