Admission to Performing Organizations – Acceptance into our elite music organizations is by audition. Merit scholarships are available to outstanding performers.

Please, fill out a google form by clicking on this line to apply to our performing organizations. 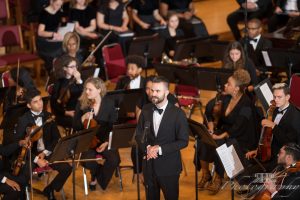 The New England Youth Ensemble of Washington Adventist University had its beginnings in 1969 when Virginia-Gene Rittenhouse formed a small ensemble among her students, rehearsing them in the living room of her New England home. This group consisted of four violins and a cello. From this beginning, the group has grown to a full-scale, highly talented, youth chamber orchestra which is now located on the campus of Washington Adventist University. It has toured extensively throughout its history, performing in major concert halls, cathedrals and churches both nationally and internationally, and receiving wide acclaim for its music making.

Its present music director, Preston Hawes, took over full-time leadership of the orchestra in 2011 after the death of its founding director. This change has brought youthful vigor to the orchestra and it continues to pursue the vision of its founder. It has a long and ongoing relationship with world renowned conductor-composer John Rutter and has appeared in approximately 90 performances at Carnegie Hall under his baton. It, with the professional wing of the orchestra, the New England Symphonic Ensemble, has appeared in over 240 Carnegie Hall performances since its Carnegie Hall debut in 1988.

The Carnegie Scholars Program of the New England Youth Ensemble (NEYE) at Washington Adventist University (WAU) is a unique mentorship program that brings qualified members of the NEYE by audition to the stage of Carnegie Hall in collaboration with MidAmerica Productions, and mentor-members of the professional branch of the ensemble, the New England Symphonic Ensemble (NESE). The NESE has performed over 200 concerts in this famous venue under the direction of numerous well-known conductors, including John Rutter, which whom the NESE has held a long-standing friendship, sharing together well over 100 concerts. 2011 marked the much-anticipated NESE expansion into the halls at Lincoln Center. 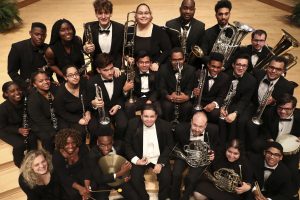 The Washington Concert Winds of Washington Adventist University is a select wind ensemble (band) fashioned after the Eastman Wind Ensemble. The purpose of the smaller wind ensemble was to establish a new medium, consisting mainly of one instrument per part, and it is this model that the Washington Concert Winds follows. The band’s repertoire is representative of the finest university level British and American wind classics. In addition, the group performs arrangements of hymn tunes and classical music for use in sacred concerts which are frequently given in church settings.

The Concert Winds have successfully toured the United States and the world attracting students from as far away as Australia. Many of the band members receive a yearly scholarship for performing in the group. Typical performances will include a bi-annual international concert tour, a Christmas concert at the White House Ellipse in Washington D.C. and performances in various churches and concert halls. 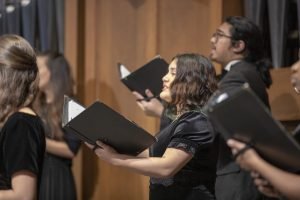 Incorporated within the chorale is a smaller select chamber choir, the ProMusica of Washington Adventist University, which was established in 1967 by the late Paul Hill, director of the famed Paul Hill Chorale. The choir maintains a heavy schedule of services and concerts, traveling extensively both nationally and internationally. It has appeared in numerous prestigious venues such as Carnegie Hall, the National Gallery of Art, and the John F. Kennedy Center for the Performing Arts, Washington, D.C., as well as in other leading concert halls and cathedrals, both within the United States and abroad. Under the leadership of its newly appointed director, Anwar Ottley, the choir strives to continue the legacy and standard of excellence for which it has become known.